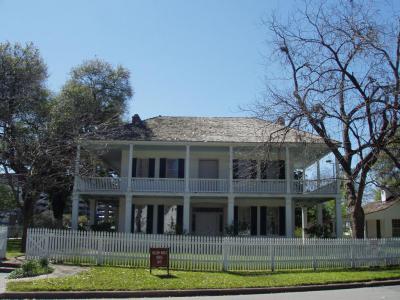 Houston's oldest surviving building, the Kellum-Noble House stands on its original foundation and retains its original brick walls made with mud from Nathaniel Kellum's brickyard. The house was built in 1847, when Houston was still a young city in the Republic of Texas. It later was home to the Noble family, and during this time Zerviah Noble and her daughter Catherine operated one of the area's earliest schools on the premises.

In 1899, the City of Houston purchased the structure as part of the property for Houston's first municipal park, and repurposed it as a showpiece and a residence for the park keeper. For a short time, its grounds were the site of Houston's first zoo. The Heritage Society was founded in 1954 to save Kellum-Noble, and its place in history, for future generations. As the city grew around the area, concerned citizens decided to save the house from demolition, which marked the beginnings of the Houston Heritage Society in 1954 (check for their guided tours!).
Image by Postoak on Wikimedia under Creative Commons License.