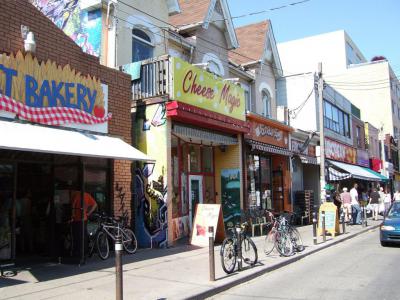 Kensington Market is a fascinating, multicultural neighbourhood, one of the oldest and best-known in Toronto. Described as “as much a legend as a district, photographed more often than any other site in the city”, this bohemian area attracts artists and tourists in great numbers to its indie shops, vintage boutiques and arts spaces, much as students and families who populate the local Victorian homes.

The place is home to a wide array of bakeries and specialty grocers selling merchandise from all over the world, as well as trendy bars, cafes and international restaurants frequented by hipsters and other colorful lot. Most of these are found along Augusta Ave. and neighbouring Nassau St., Baldwin St., and Kensington Ave.

During the early 20th century, the area became populated by eastern European Jewish immigrants, prompting a nickname "the Jewish Market". After the Second World War, most of the Jews moved north to the more prosperous uptown areas and suburbs. During the 1950s, the arrival of new waves of immigrants from the Caribbean and East Asia made the community even more diverse. The Vietnam War brought a number of American political refugees, adding a unique utopian flavour. The closeness of Chinatown makes the Chinese the largest ethnic group here. During the 1980s-1990s, substantial groups of immigrants also came from Central America, Somalia, Ethiopia, Sudan, Iran, Vietnam, Chile and other global trouble spots.

A unique architectural feature of the neighbourhood are the extensions built onto the front of many buildings. In recent years, the Market has seen a small explosion of upscale cafés, restaurants and clubs, replacing many of the older ethnic businesses. There has been much speculation that Kensington's long history as an immigrant working-class neighbourhood is near its end.

The annual "Kensington Market Festival of Lights", now known as the Kensington Market Winter Solstice Festival, is celebrated as a street parade during the Winter Solstice in December. Over the years, Kensington Market has been the setting for a number of television series, such as King of Kensington, Twitch City, and Katts and Dog, as well as the street riot scenes of the 1984 comedy Police Academy. It was also the primary location for Cory Doctorow's novel Someone Comes to Town, Someone Leaves Town.

In November 2006, Kensington Market was designated a National Historic Site of Canada.
Image by ぐら(Gura) on Wikimedia under Creative Commons License.
Sight description based on wikipedia