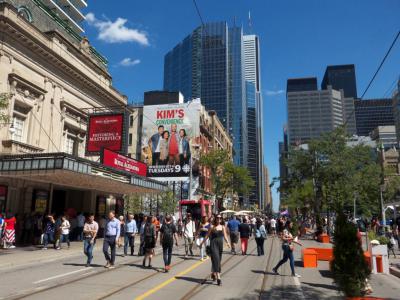 The Toronto Entertainment District is concentrated around King Street West between University Avenue and Spadina Avenue. It is home to theatres and performing arts centres, three of Toronto's major-league sports teams, plus an array of cultural and family attractions. The area is also home to most of the nightclubs in downtown Toronto.

Canada's Walk of Fame runs along King Street, from John Street to Simcoe Street, and south on Simcoe. It is a tribute in granite to Canadians who have gained fame in the fields of music, literature, journalism, dance, sports, acting, entertainment and broadcasting.

The Fashion District (also known as the Garment Distric) is located to the west of intersection with Spadina Avenue. This commercial and residential area is occupied by a mix of artists, musicians, designers, professionals and students. Many former garment warehouses house clothing outlets while others have been refurbished into artists’ studios and galleries, publishers, software and tech design offices and condos and lofts.
Image by Vlad Podvorny on Wikimedia under Creative Commons License.
Sight description based on wikipedia