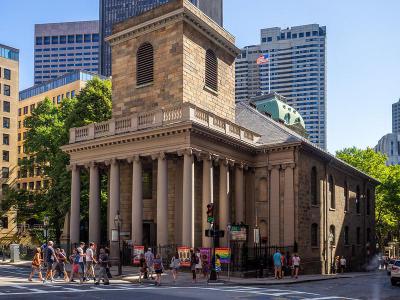 King's Chapel is an independent Christian Unitarian congregation affiliated with the Unitarian Universalist Association that is "Unitarian Christian in theology, Anglican in worship, and congregational in governance." It is housed in what was formerly called the "Stone Chapel", an 18th-century structure at the corner of Tremont Street and School Street in Boston. The chapel building, completed in 1754, is one of the finest designs of the noted colonial architect Peter Harrison and was designated a National Historic Landmark in 1960 for its architectural significance.

Inside, the church is characterized by wooden columns with Corinthian capitals that were hand-carved by William Burbeck and his apprentices in 1758. The current uniform appearance of the pews dates from the 1920s. Music has long been an important part of King's Chapel, which acquired its first organ in 1723. The present organ, the sixth installed in the Chapel, was built by C. B. Fisk in 1964. The local burying ground is the site of the graves of many historic figures.

Why You Should Visit:
Another example of a historically relevant edifice in the heart of Boston.
Architecturally speaking, it is simple, yet the craft of the details is exceptional.

Tip:
Entry into the church is free; however, donations are accepted at the front entrance.
They offer a couple of tours (Bells & Bones + Art & Architecture) for a fee – take them!