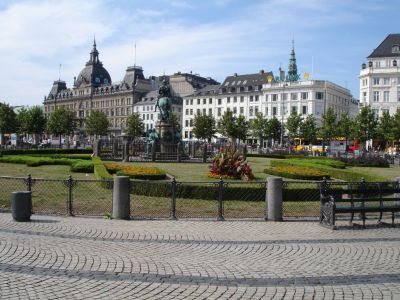 A popular tourist attraction, Kongens Nytorv Square is situated in central Denmark in Stroget Pedestrian Street. This public square is huge and impressive with an equestrian statue of Christian V at the center.

This square was constructed by Christian V in 1670 during the expansion of the fortified city. Around the square, you will find many prominent buildings such as the 1683Thott Palace, 1671 Charlottenborg Palace and 1874 Royal Danish Theatre.

Abraham-Cesar Lamoureux, the French sculptor created the equestrian statue in 1688. This statue, originally made in gilded lead, holds the distinction of being the oldest statue in Scandinavia. In 1939, the statue was recast in bronze.

You will find a statue of the king with a laurel wreath helmet dressed as a Roman imperator. At Kongens Nytorv Square, there are four allegorical statues at the plinth foot. Representing fortitude and prudence, the figures of Alexander the Great and Minerva, face Charlottenborg Palace. On the opposite side, you will find statues of Artemisia and Herkules signifying honor and strength.

“Krinsen” or circle of wreath in Danish surrounds Christian V’s statue in the form of an elliptical parterre. Do not miss out the 1913 telephone stand and old kiosk with their hand carved ornamentation and copper clad roof at this square.
Image Courtesy of Wikimedia and Jim G.