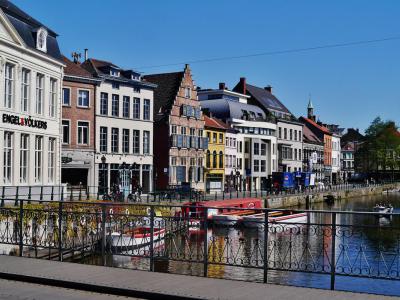 Kraanlei district used to be Ajuinlei, "The Onion Place." In 1354 a great crane based on designs of Archimedes was erected to lift out cargo from barges arriving at the quai. The the square came to be known as Kraanlei "Crane Place." Onions continued to be available here until the 1940s.

There was more than one crane, but today only the name remains. The Kraanlei lies along the riverfront. The bank is planted with small trees. There are 19th century water fountains with basins at levels for birds, humans, horses and dogs. Artifacts of the Belle Epoque era, the fountains are now dry.

There is much to see and admire, strolling along the bank of Kraanlei or from a pleasure boat in the river.

Patershol is an old medieval section of the city bordering the River Leie. It has a street layout preserved from the middle ages. At first the neighborhood was a military zone of the Counts of Flanders. The Counts eventually moved to Gravensteen in the 15th century.

After the Counts left in the 15th century, Lawyers and tradesmen moved in, and a wealthy middle class. In the 19th century, industry and workers settled in the suburbs. The area became a ghetto but in 1970 renovation and restoration had begun to revive the neighborhood.

Each year on August 15th, the patersholfeesten, the "little Ghent feasts" are observed. There are performances on the Kaatssplelplein, the children of the Patershol sing and paint and there is a flea market on Sunday.
Image Courtesy of Wikimedia and Zairon.
Sight description based on Wikipedia.