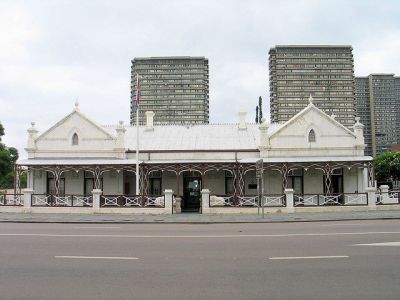 Kruger House is the historic Pretoria residence of the President of the South African Republic, Paul Kruger (1825-1904). It was built in 1884 by architect Tom Claridge and builder Charles Clark. Milk was used instead of water for mixing the cement from which the house was constructed, as the cement available was of poor quality. The house was one of the first in Pretoria to be lit by electricity. The house contains either the original furnishings or items from the same historical period, some of the many gifts that were presented to Kruger, and other memorabilia. An interesting feature of the house is the pair of stone lions on the veranda that were presented to President Kruger as a birthday gift in 1896 by the mining magnate Barney Barnato. The Kruger House is now a house museum that tries to recreate the ambience of the period in which Kruger lived.
Image by joonasl on Flickr under Creative Commons License.
Sight description based on wikipedia