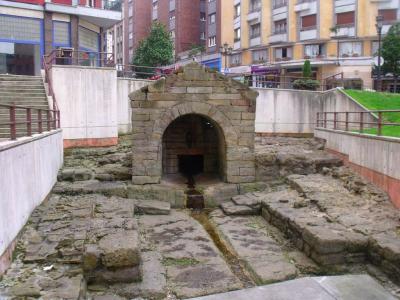 The Foncalada is a fountain of potable water located outside of the city walls of Oviedo. It was built by king Alfonso III of Asturias in the 9th century. This building remains the only surviving civil architectural item for public use of the High Middle Ages. Its name was given after the inscription in Latin: “fontem calatam”. Built in Pre-Romanesque style, it is included in the UNESCO World Heritage Site list since 1998. It was originally placed near the city walls, next to an ancient Roman road. The decoration on top depicts the Victory Cross, symbol of Asturias. This public fountain is erected over a spring. The source is a rectangle of about 4 meters (13 ft) wide. It has a shape of a vaulted chapel. Below the Asturian Cross, two inscriptions remain: “With this sign the pious are protected, With this sign you shall defeat the enemy”; “Lord, put the sign of the salvation on this fountain to not allow hitting angel to enter”.
Image by Jaume Meneses on Flickr under Creative Commons License.
Sight description based on wikipedia