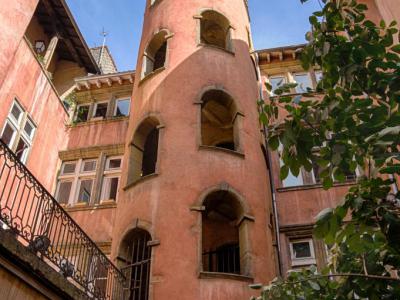 Maison du Crible (“The House of the Sieve”), more commonly known as La Tour Rose ("The Pink Tower") – for the attached staircase tower of ocher color, is one of the most remarkable buildings of Lyon's Saint-Jean neighborhood.

It was built in the 16th century, reportedly by the Italian architect Sebastiano Serlio of Bologna. The entire building – except for the courtyard which is restored in the 17th-century – features Renaissance style. The origin of the name "House the Sieve" is questionable. Certain sources associate it with Martin de Troyes, the tax collector who used to live here in the 16th century and whose coat of arms, displayed on the facade at that time, might have carried a sieve.

Among other former prominent residents of the Pink Tower was King Henri IV of France, who stayed here for a few days in 1600 during his wedding to Marie de Medici. In 1937, the property was declared a historic monument.

After many years of being vacant, the building got a “shot of life” when the upscale MiHotel moved in. This incurred drastic renovations resulting in the creation of the Food Traboule – a unique covered food hall spread across three floors and featuring seven areas with a variety of open-kitchen counters. Anyone interested in tasting the wide-ranging facets of Lyon’s creative and dynamic gastronomy, must visit this place – renowned for being delicious, simple, and what's also important – affordable!
Image by Rappillard on Wikimedia under Creative Commons License.