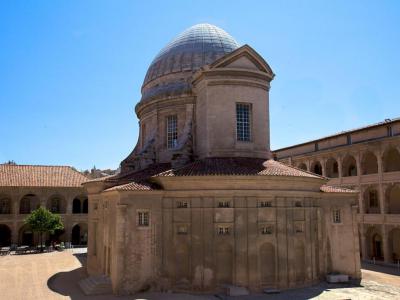 La Vieille Charité, constructed between 1671 and 1749, is a former almshouse, now functioning as a museum and cultural center, situated in the heart of the old Panier quarter of Marseille in the south of France.

The main body of the structure is a rectangle, 112 m by 96 m, composed of four walls in pink and yellow-tinted molasse stone from the ancient quarries at Cap Couronne, with no outward facing windows. On the inside are three arcaded galleries superposed on each other, opening onto an interior courtyard measuring 82 m by 45 m. In the center of the courtyard is a harmonious chapel, a round church, crowned by an ellipsoidal dome and fronted by a portico in the classical style with Corinthian columns. This Baroque chapel ranks as one of Puget's most original designs.

In the seventeenth century the repression of beggars was conducted with great brutality in France. Guards called "beggar-hunters" had the task of rounding up beggars: non-residents among them were expelled from Marseille, and natives of Marseille were shut up in prison. The almshouses served as workhouses for the beggars. Children were found jobs as domestic servants, cabin boys or apprentices with seamstresses or bakers.

Spared during the French Revolution, the building was used as an asylum for "vagrants and the dispossessed" in the nineteenth century. It was transformed into a barracks for the French Foreign Legion until 1922, when it was used to lodge those displaced by the demolition of the district behind the Bourse and later those made homeless by the dynamiting of the Old Port during the Second World War.

For many years after the World War II, the building was plagued by squatters living in unsafe conditions. Between 1968 and 1986, with the intervention of Ministry of Culture, La Vieille Charité was painstakingly restored to its former glory.