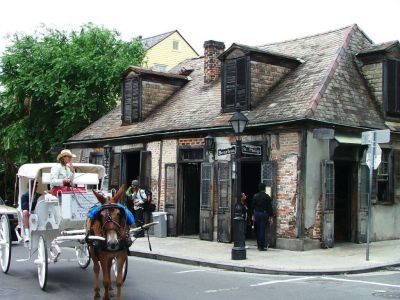 Nestled in the heart of the French Quarter, on Bourbon Street, what a surprise it is to find this typical early Creole cottage, which seems to have been transported from a different era. It is believed to be the oldest structure continually used as a bar in the southern US. It was supposedly served as a front for slave trading, contraband, and other illegal activities involving the city's most famous pirate, Jean Lafitte and his "Baratarians", a thousand-strong band of smugglers.

Built in the 1720s, the building was declared a National Historic Landmark in 1970 and in 2013 Esquire Magazine ranked it among the best bars in America. Even if you are not drinking, take a walk inside and look around - it is especially atmospheric. No electric lights are allowed here, so even amid the chatter and the blaring jukebox, the cavern-like, candlelit interior is akin to time traveling. A must if you love history, stories, and old buildings!

Tip:
The sneaky strong "purple drink" – otherwise known as Voodoo Daquiri – is what some people come here for, but you'll probably be more interested in catching the piano player (and singer) who is very good at engaging the crowd in sing-alongs; therefore, be sure to arrive after 9pm!