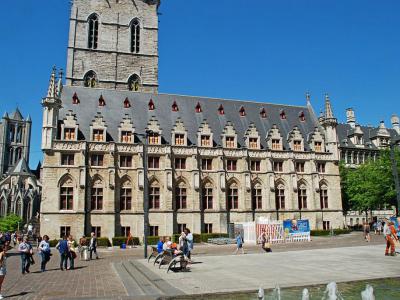 The Lakenhalle, or Cloth Hall, is adjunct to the Belfry. Construction started in 1425 but it was still incomplete twenty years later. Only seven of the eleven bays had been completed. In 1903 four more bays were added.

The Cloth Hall was built to harbor the business of the cloth trade of Ghent. Woolens and textiles had made Ghent a boom town of the middle ages. Fortune changes. The textile trades fell off in time and other tenants, including a militia Guild and a fencing school, moved into the Cloth Hall.

There is an annex to the Cloth Hall dating from 1741, called the "Mammelokker." The annex was the guards' quarters and the entrance to the city jail in the Cloth Hall from 1742 until 1902. The name Mammelokker means "breast sucker." It refers to the sculpture of the Roman legend of Pero and Cimon above the front door of the annex.

Cimon was sentenced to death by starvation. His daughter, Pero, who was a wet nurse, visited him in prison and breastfed him. She saved his life. His guards, awed by this show of filial devotion, released him.