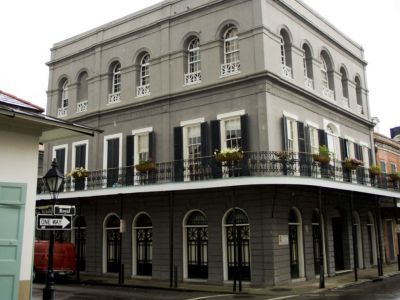 If you desire a thrill, have watched "American Horror Story", or are interested in dark, gory history, this place is perfect for you. The only downside is you can't get in, but the outside is really all you need to see for the shivers; night or day.

Part mansion and part hell, this dwelling is known as one of the most haunted in New Orleans. Its most famous occupants were Madame Lalaurie and her husband, a doctor, who perpetuated acts of unspeakable cruelty upon their slaves. Finally, one slave set fire to the house to escape the misery, and upon their sadistic acts being uncovered, the LaLauries bought off the police and fled to New York, then France, leaving behind a number of dead and dying former servants. When the discovery of the abuse became widely known, a mob of local citizens attacked the residence and "demolished and destroyed everything upon which they could lay their hands". A sheriff and his officers were called upon, but by the time the mob left, the property had sustained major damage, with "scarcely any thing remaining but the walls."

Nicolas Cage, the most eccentric actor of his generation, bought the house in 2007 for a rumored $3.4 million, having figured "it would be a good place in which to write the great American horror novel". He didn’t get too far with the novel and allegedly lost the house to the IRS.
Image Courtesy of Wikimedia and Dropd.