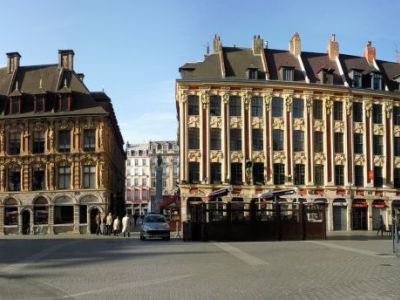 Built between 1685 and 1687 by the contractor Simon Vollant to the design by the architect Julien Destrée, this row of 14 two-bay houses is a reconstruction of wooden dwellings that had stood here since 1551. Adopted in 1674, the harmonization rules imposed by the Magistrate required uniformity between the new construction and the neighboring buildings, particularly the Vielle Bourse, implying three floors and an attic.

Like the Old Stock Exchange, the ground floor is made up of sandstone arches supporting a three-storey bay of stone and brick surmounted by a mansard. The sobriety of lines of the façade, the colors and patterns of its decoration achieve a synthesis between the French classical architecture, which burst into the city after the capture of Lille by Louis XIV in 1667, and the local Flemish architecture to give birth to a style that could be described as Franco-Lille.

The row owes its current name to a belvedere erected by the Duke of Burgundy, Philippe Le Bon, in 1425, that used to be located just opposite, and was demolished in 1651. Versions concerning the origin of its name – Beauregard – vary; the most common one suggests that perhaps in the 15th century the Italian word “belvedere” had not yet come to designate what is now called "beauregard".

On the right side of the façade, one can see a dozen cannonballs stuck in – reminders of the siege of Lille in 1792, during which the city got showered with more than 30,000 of them. One such cannonball, that hit the Morel brewery, was eventually painted pink with a nipple to represent a breast.
Image Courtesy of Wikimedia and Velvet.
Sight description based on Wikipedia.