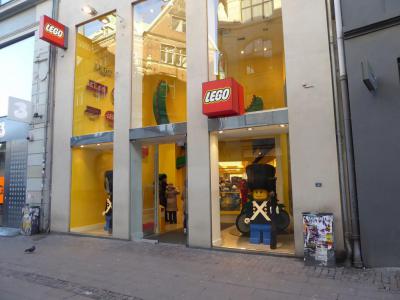 What to buy here: LEGO toys. Who has not at some point played with LEGO toy building bricks as a child? The popular Danish plastic toy was introduced in 1947 by founder Ole Kirk Christiansen. The name LEGO comes from the Danish words leg godt, meaning play well. The original toy building bricks were just the start. Later, in 1969, came Duplo building bricks, a series of simple blocks twice as big as the original and aimed at young children. LEGO also produces plastic figures, merchandise and themed sets often with a macho theme, like Star Wars, Indiana Jones, Toy Story, Batman, Cars, Pirates of the Caribbean, Avatar, Spider Man and so on. LEGO has a massive following and subculture of movies, games, magazines, clothing line and of course theme parks. The original LEGOLAND is located in the town of Billund in Denmark. LEGO toys come in many variations from only $5. In Copenhagen you can enter the world of LEGO in the brand new flagship store.

It would be a pity to leave Copenhagen without having explored its specialty shops and bringing home something truly original. We've compiled a list of gifts and souvenirs, which are unique to Copenhagen, that can be bought in shops around the Indre By (inner city).

The Nørreport area is one of the most colorful and culturally vibrant districts of Copenhagen. It is a region that mixes the old and the new. It is a favorite area for local youth and a great place for a walk. Nørreport has many green spaces, art complexes and historic sites to visit. Discover all Nørreport has to offer on this walking tour.

Slotsholmen, translated as The Castle Islet, is an island in the harbour of Copenhagen. Recognized as the center of the Government of Denmark since the Middle Ages, the island is sometimes referred to as "the Island of Power". Take this tour to explore the Castle Islet with us.