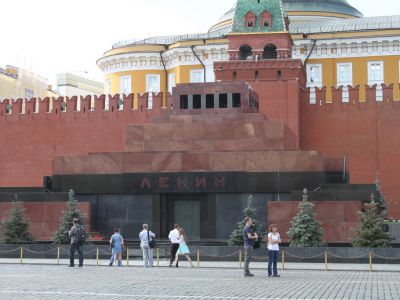 The Red Square Mausoleum is the final resting place of Vladimir Lenin, the illustrious leader of the Russian Revolution and the founder of the Soviet state. Lenin died on January 21, 1924, aged 53. Despite his expressed will to be buried alongside his mother in St. Petersburg, the overall public sentiment suggested that a simple burial would not be enough.

In response to thousands of appeals urging to preserve Lenin’s memory for future generations, Stalin pushed for the decision to embalm his body and the government began the task of constructing a proper tomb for it. The marble and granite mausoleum, replacing a temporary wooden one, was designed by Alexey Shchusev and completed in 1930.

Here Lenin’s body has been on display ever since, with rare exceptions during wartime in the 1940s when it was evacuated to Siberia. Over the decades, it has been one of the main tourist attractions in Moscow, visited by tens of millions of people.

Contrary to the rumors about a “wax mummy” being on display, it is in fact Lenin that you see. A special and complicated embalming process helps to keep the body presentable to the public. An interesting side note about the tomb is that Joseph Stalin was briefly interred there beside Lenin until the government removed it and buried in the Kremlin Wall Necropolis during the de-Stalinization campaign in the 1960s.

No photography, video or audio recording of any sort is allowed inside the mausoleum. All visitors are searched prior to entering and are obliged to show respect during the visit: no talking, smoking, hands in pockets, or wearing hats (except for females).

Why You Should Visit:
A glimpse of the historic figure, if only for a minute or so!

Tip:
Remember to keep moving – you won't be there to stop and stare.
The entrance is free.

Opening Hours:
Tue, Wed, Thu, Sat: 10am-1pm (the earlier you get there, the shorter is the queue)
Image by flowcomm on Flickr under Creative Commons License.