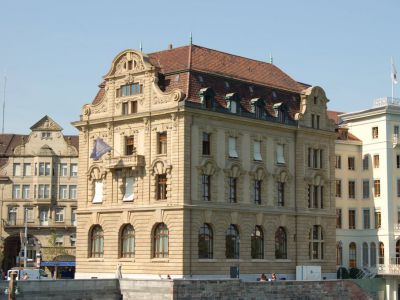 The Three Kings Hotel is one of Switzerland's oldest hotels and has welcomed visitors and merchants since the 13th century. In the middle age, the hotel was a popular place to stay among salt traders due to its location right next to the salt tower where ships were docked in order to transport the sought-after commodity down the Rhine River and out into the rest of Europe.

The current luxurious hotel was originally built in 1844. Johann Jakob Senn was a master tailor who foresaw that the railway and river steamer revolution would expand leisure travel and gambled on building this luxury hotel. Basel architect Amadeus Merian designed the Belle Epoque-style hotel.

Many grand hotels are named after the Biblical "Three Kings," who brought gifts to the baby Jesus. As a destination for travelers and merchants, "The Three Kings" represents a tradition of welcoming traders and travelers.

Part of the hotel was sold and used as a bank in the early 20th century. Next, this portion was used at the City Tourist Information Office. Finally, in 2004, Thomas Straumann purchased the hotel and the re-purposed block. Over two years, Straumann renovated and rebuilt the hotel. His goal was to keep the beauty and allure of the 1844 property while updating it to meet modern luxury standards.

The hotel has attracted a variety of celebrities. Notable visitors include Helmut Schmidt, the Dalai Lama, King Faroul of Egypt, and Queen Elizabeth II. In 1798, Napoleon Bonaparte met Basel officials here to discuss the French-Swiss relationship.

Famous artists and writers have also frequented the hotel. Charles Dickens, Voltaire, Jean-Paul Sartre, Picasso, and Duke Ellington are among the celebrities who have enjoyed The Three Kings Hotel's hospitality.
Image Courtesy of Wikimedia and Norbert Aepli.