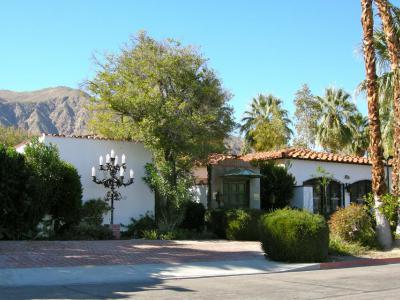 Although the flamboyant Grammy winner, Władziu Valentino Liberace owned four Palm Springs homes throughout his lifetime, this beautiful Mediterranean estate at the intersection of Alejo and Belardo roads is most widely known for representing his particularly eclectic vision.

Before becoming Liberace's, the estate was a boutique hotel with the five bedrooms already converted to guest suites, but the pianist – possibly the music world's ultimate showman – turned them into thematic units: the Valentino bedroom featured a sleigh bed and other furnishings, all originally from Valentino's home "Falcon's Lair", purchased at an auction; the perky Safari Room had a tiger painting, a lion tapestry, and a life-size horse sculpture; and even a Persian tent room was assigned to a side of the pool. When not frequenting these, Liberace was said to have prayed daily in a shrine he built to St. Anthony. He reportedly passed away here in February 1987.

While the property has lost some of the dazzles that Liberace gave it, the several L's strategically placed throughout the exterior – including on the garden fencing, on the garage doors (where the pianist was said to have taken to living at one point), and in mosaic tiles in the cement in front of the side door – remove any doubt as to whom it once belonged.
Image Courtesy of Flickr and IrishFireside.