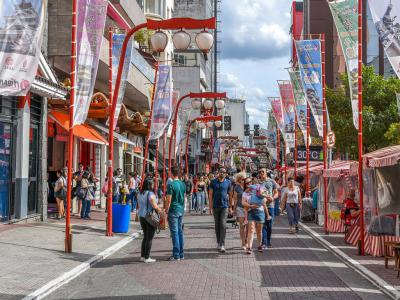 The Liberdade (freedom) name arises from the 1888 abolition of slavery in Brazil. Before abolition, slaves and convicts were executed in the public square now known as Praca da Liberdade.

In the early 1900s, the area became popular with Japanese immigrants. Today, over one million Japanese and Brazillian-Japanese people call this area home. Liberdade is the largest Japanese community outside of Japan. In 1974, a nine-meter torii was erected. This gorgeous traditional Japanese arch marks the entrance to Liberdade.

Liberdade is a popular place for tourists and locals to immerse themselves in Asian culture. Japanese comics (manga) are sold here. Fans often participate in cosplay, dressing up as their favorite anime characters. You can also find Japanese candy and gifts. Restaurants serving sushi and sashimi abounds. Don't miss having fun at a karaoke bar.

Rua Galvão Bueno is one of the main streets in Liberdade. Here, you'll find antique shops, booksellers, grocers, and an anime and manga mall. Rua Galvão Bueno features a pedestrian bridge over Viaduto do Glicério. This bridge is a great place to take photos of São Paulo.
The Museum of Japanese Immigration describes the history of Japanese culture in Brazil.

Liberdade is the largest Japanese community outside of Japan. Immerse yourself in Japanese culture and food.

Visit on the weekend to take part in the street market. Check out the food stalls and try Japanese favorites such as ramen noodles, yakisoba (fried noodles), and gyoza (dumplings).
Image Courtesy of Wikimedia and Wilfredor.