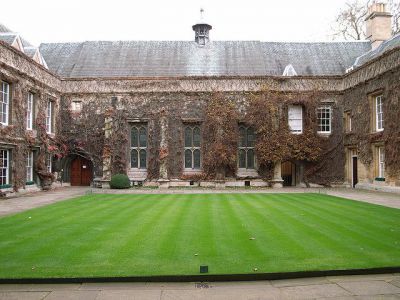 One of the constituent colleges of the University of Oxford, Lincoln College (formally, The College of the Blessed Mary and All Saints, Lincoln) on Turl Street is perhaps one of its most intriguing. Founded in 1427 by the Bishop of Lincoln, Richard Fleming, it consists of three quadrangles – the Front Quad built in the 15th century, the Chapel Quad built in 1608–1631, and the Grove Quad in the 19th century – and is therefore said to preserve "more of the character of a 15th century college than any other in Oxford".

The Chapel, which was built in the Early Gothic style, has enameled rather than stained glass windows, which is a difficult technique, and were created by Abraham Van Linge, who was a master at this craft.

The east end window depicts twelve Biblical scenes: the top six are from the New Testament, and the bottom six from the Old. The north window shows the twelve Prophets, while the south window features the twelve Apostles.

The rood screen, that separates the ante chapel and the main chapel, is made of cedar. The ceiling is beautifully carved and on the front pews you can see the figurines of Moses, Aaron and the saints Peter and Paul.

The Library is in the converted All Saints Church, whose spire is one of the “dreaming spires” of Oxford. In the bell tower, the full peal of eight bells are still regularly rung.

Notable alumni include John Radcliffe, John le Carré and Rachel Maddow, among many others.
Image Courtesy of Flickr and stevecadman.
Sight description based on Wikipedia.