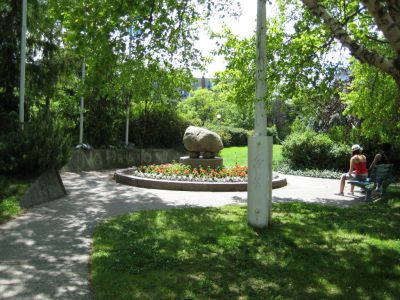 In the year 1940, Norway was attacked and the King and the government’s dignitaries had to flee the country. However, they decided to fight for their freedom and after negotiations with Great Britain, a camp was set up near Toronto’s Island Airport later that year. Norwegians who escaped their homeland and volunteers from Canada signed up at this base and were trained with the help of the British forces. Norwegian training camps and military offices gave the region its name, Little Norway. Over 2000 personnel were trained and sent to fight alongside the British forces between 1940 and 1945. After the war, the Norwegians gifted the base a commemorative plaque which can be seen even today.

In 1986, the 2.36 hectare area was converted into a park. A flagpole and the plaque still remind the visitors the importance of the place in history. Today, the park is decorated with art installations and ornamented gardens. It also has a soccer pitch and a baseball diamond. The City also plans to install a splash pad at this park. The facilities being provided at this park also benefit the students of the nearby public school and community residents. Plans for a dog park are being discussed for the park too. A little piece of history and a little bit of fun, the park has both to offer to its visitors.
Image by SimonP on Wikimedia under Creative Commons License.