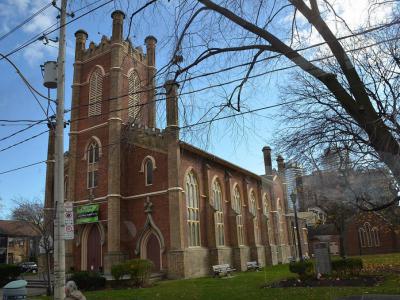 Standing modestly on Kings Street in the Corktown neighborhood is the oldest standing church in Toronto. Simple and austere in its appearance, the Little Trinity Church has served as a place for worship, peace and brotherhood for many generations of families in Toronto. Built in 1844, the Church is the oldest surviving church building in the city.

The cornerstone for the Church was first laid in 1843, after a congregation that was set up by the working class who could not afford the high pews at the only existent Anglican Church at that time, the St. James Cathedral. Built on a modest and humble budget, the main aim of the Church was to provide a place of worship for one and all, without any reservations for the rich and elite. Many craftsmen and artisans contributed voluntarily and on a minimal budget to decorate and beautify the Church.

With a brick red exterior and hints of stone grey, the Church’s exteriors may not strike as spectacular but does have its own antique charm. The architect, Henry Bower Lane was just 25 years old when he designed the Little Trinity Church. An architect of English origin, he is known to have contributed significantly to the Toronto landscape in the mid-19th century.
Image by shankar s. on Wikimedia under Creative Commons License.
Sight description based on wikipedia