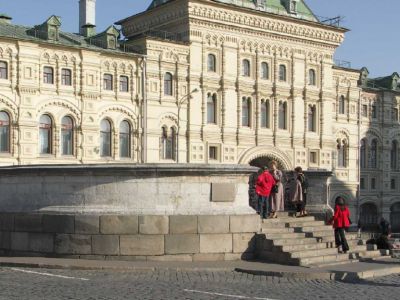 The 13-meter circular stone platform in front of Saint Basil's Cathedral on Red Square derives its name from the two Russian words: Lob ("forehead") and Mesto ("place"). The word “Lob” is also the archaic Russian for a steep river bank. The original platform, made of brick, was built in the 1530s. First mentioned in 1547 as the place of public address to the Muscovites made by Ivan the Terrible, it was used primarily for announcing Tsar's edicts and conducting religious ceremonies.

Despite a common misconception, the platform itself was never used for executions. Sometimes scaffolds were placed nearby, as was in case of the infamous Streletsky execution in 1698 when 100 Royal Guards were hung by Peter the Great for staging a revolt. But usually public beheadings or hangings were carried out at Vasilevsky Spusk behind St. Basil's.

Lobnoye Mesto was also the culmination point of the so-called "donkey walk" on Palm Sunday, during which the Tsar walked on foot, leading the Patriarch of Moscow seated on a donkey, from the city gates to Red Square. The procession ended at the Lobnoye Mesto decorated with a depiction of Calvary.

The nearby Monument to Minin and Pozharsky commemorates the events of 1612 during which Prince Pozharsky ascended the Lobnoye Mesto to pronounce Moscow's liberation from the Polish occupation. In 1786, architect Matvei Kazakov rebuilt the site in white stone adhering to its original location and proportions.

During the Soviet period, the Lobnoye Mesto became something of a Speaker's Corner for voicing protests. Among them was the opposition against the Soviet invasion of Czechoslovakia in 1968. In a bid to ensure no unauthorized rallies, access to the Lobnoye Mesto was strictly prohibited and closely guarded by the police (then “militia”).
Image by Kopchiowski O.P. on Wikimedia under Creative Commons License.
Sight description based on wikipedia