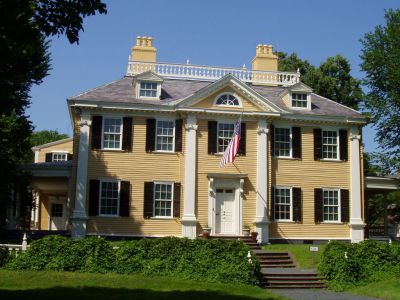 Just a few blocks away from Harvard Square, stands a historic house that weaves two prominent figures in American history into the same home. Originally, the property was built in 1759 for John Vassall, who fled the Cambridge area at the outset of the American Revolutionary War because of his loyalty to the king of England.

Later, for almost 50 years, this was the home of noted American poet Henry Wadsworth Longfellow, while previously, for a time, it had served as the headquarters of George Washington. The last family to live here were the Longfellows, and it was here that Longfellow wrote Hiawatha and Evangeline. In 1972, the home was made part of the National Park Service.

Notably, all furnishings within the house are not reproductions or period pieces, but the real deal from Longfellow's days. Filled with the family's possessions, the house makes it feel as if the Longfellows have just stepped out for a walk in their cute little garden outside – the lovely, peaceful spot out back filled with greens and flowers with a pergola to sit for a rest. The first floor is totally intact from Longfellow's time including his personal belongings – the poet's writing desk and papers are there to see, like he was working on a poem just now.

Rather than rope off the rooms, the house has carpet runners that the guides ask you to honor. Wise!
Image by Daderot on Wikimedia under Creative Commons License.
Sight description based on wikipedia