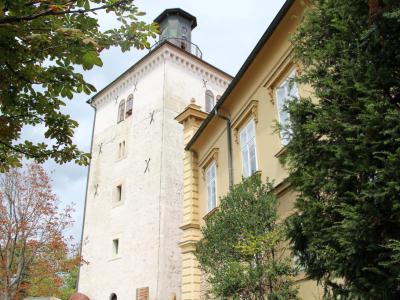 The Lotrščak Tower is a fortified tower located in Zagreb, in an old part of town called Gradec or Gornji grad (Upper Town). Dating back to the 13th century, it was built to guard the southern gate of the Gradec town wall. The name is derived from Latin campana latrunculorum ('thieves' bell'), referring to a bell hung in the tower in 1646 to signal the closing of the town gates. The Grič cannon (Grički top) is one of Zagreb's landmarks. In the 19th century, a fourth floor and windows were added to the tower and a cannon was placed on the top. Since January 1st, 1877, the cannon is fired from the tower on Grič to mark midday, thus having functioned as a sign for the bell-ringers of the city's churches to do their job.

Why You Should Visit: Not only does the tower have an interesting history behind it; you can also experience the majestic view of Zagreb from one of the town's highest points.

Tips: Try to get there just before noon and cover your ears when the cannon goes off at precisely 12:00 each day.
Image Courtesy of Wikimedia and dnik.
Sight description based on Wikipedia.