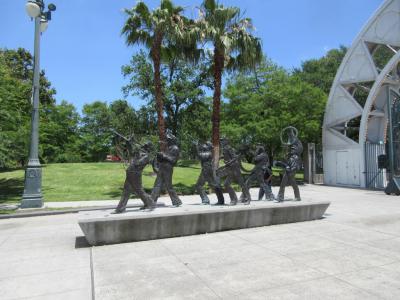 Louis Armstrong Park is a 32-acre (130,000 m2) park located in the Treme neighborhood of New Orleans, Louisiana, just across Rampart Street from the French Quarter. This park was designed by New Orleans architect Robin Riley and was named after New Orleans-born Jazz legend Louis Armstrong (August 4, 1901 – July 6, 1971), an African American trumpeter, composer, vocalist, and actor who was among the most influential figures in jazz.

Armstrong was born and raised in New Orleans. Armstrong has a foundational influence in jazz, shifting the focus of the music from collective improvisation to solo performance. His career spanned five decades, from the 1920s to the 1960s, and different eras in the history of jazz. In 2017, he was inducted into the Rhythm & Blues Hall of Fame.

Louis Armstrong Park was home to the first New Orleans Jazz & Heritage Festival in 1970. More recently it has been the home of many other events, including the "Jazz in the Park" free concert series, the Treme Creole Gumbo Fest, and the Louisiana Cajun & Zydeco Festival.

The park contains the New Orleans Municipal Auditorium, the Mahalia Jackson Theater for the Performing Arts and several buildings owned by the New Orleans Jazz National Historical Park. Monuments within include a 12-foot statue of Louis Armstrong, a bust of Sidney Bechet, and a depiction of Buddy Bolden. Both Bechet and Bolden are African Americans and prominent figures in Jazz movement.
Image by Infrogmation of New Orleans on Wikimedia under Creative Commons License.