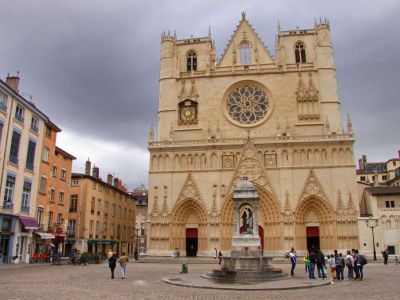 The Lyon Cathedral (Cathédrale Saint-Jean-Baptiste de Lyon) is an archbishopric church and thus is the main church in the city.

It was built between 1165 and 1480 on the site of the ancient Sainte Croix and Etienne churches, whose vestiges can be seen in the nearby archaeological gardens.

Because of the time it took to build, the cathedral has two distinct architectural styles: the eastern end containing the apse and the choir is in Romanesque style, while the nave and the façade are in Gothic style. Above the main portal there are several medallions representing the signs of the Zodiac, the Creation and the life of Saint Jean.

While the church may seem austere, if you visit the Basilique de Fourvière, in the choir you will see lovely 13th century stained glass windows, and on the left and right of the main altar there are two crosses dating back to 1274. You can also admire there several paintings, including the “Adoration des Mages” by Houyez, “La Circoncision” by Vignon and “Le Christ et la cananéenne” by de Plattemontagne.

The most compelling item within the cathedral is the magnificent astronomical clock in the north transept. Built in the 14th century, it is a marvel of technology for the era and it still works today. When it chimes on the hours of 12, 2, 3 and 4, a cock crows and the angels make a triumphant sound – reminding us of St Peter denying Christ before dawn and His subsequent entrance into Heaven.
Image by Guillaume Baviere on Flickr under Creative Commons License.