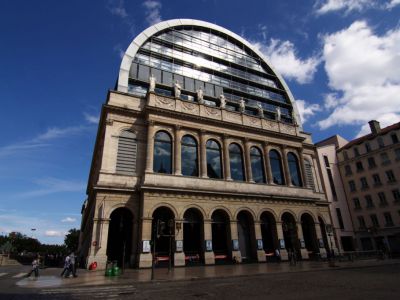 A successful amalgamation of the old and new, the Lyon Opera House is in fact the third incarnation of an opera house on this site.

The original one was built in 1756, designed by Jacques-Germain Soufflot. By 1826 the building had proven too small and had to be pulled down. Another, larger theater, featuring Neo-Classical style, was built in its place in 1830 by architects Pollet and Chenavard.

That edifice, in turn, was also considered small and outdated in the mid 20th century, upon which a competition was launched to build a renovated and enlarged version. The competition was won by Jean Nouvel in 1986.

Nouvel kept only the façade and made more space by having basement areas dug out for rehearsal rooms. On top of the building, above the statues of the Muses, he added a steel-and-glass cylinder that is seen today. This allowed to hide the rather ugly fly tower and is now mostly used by the ballet. The magnificent lobby retained the original stucco work, gilts and frescoes, tall arched windows and several lovely chandeliers. The main auditorium is oval shaped and has six levels of galleries.

If you consider taking in a play, opera or ballet, whilst in Lyon, don’t hesitate to book your tickets here. There are wonderful views of the city to be enjoyed from the dome’s terrace too.
Image by Pierre Guinoiseau on Flickr under Creative Commons License.