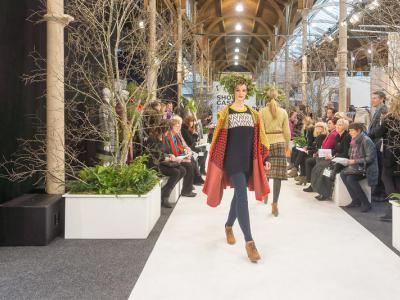 What to buy here: Designer Knitwear.

Knitwear is an ongoing element in a lot of Danish fashion collections. And like so many other branches in Copenhagen, the fashion industry likes to mix old and new. Home to Copenhagen Fashion Week twice a year, the Danish capital has bred a lot of Danish fashion designers. Clothing designers like Mads Nørgaard, Denmark’s rebel designer Henrik Vibskov, as well as Malene Birger and Vigga Svensson have earned an international reputation. Each designer has his or her unique trademark and style, but in general fashion on the streets of Copenhagen tends to be a little bohemian and rock and roll chic during the day, while classic and elegant at night.

Mads Nørgaard Copenhagen has men’s, women’s and children’s clothing collections and build the collections around the core of fashionable classics. In 2008 Mads Nørgaard also presented a 100% organic underwear line for men.

The demand for organic clothing is growing rapidly in Copenhagen and elsewhere, and designers like Vigga Svensson, the woman behind the Katvig children’s clothes, is a forerunner in this field. She has managed to produce fashionable clothes while protecting the environment. The children’s clothes are made of recycled organic cotton and recycled polyester, made out of plastic bottles, thus protecting nature, the people making the clothes and the kids wearing it. Even the transport and packaging is environmentally friendly.

Denmark’s leading fashion lady Malene Birger designs in her own words “affordable luxury”. Her women’s collection is elegant and gives an artistic spin on modern classics.

Denmark’s fashion rebel Henrik Vibskov is more than just a designer. He is also an artist and musician – known for bringing it all together in his fashion shows. His style is fun, alternative and controversial. His collections include men’s, women’s and also children’s wear. Since 2003 he has been the only Scandinavian designer on the official show schedule of the Paris Men’s Fashion Week.
Image by William Murphy on Flickr under Creative Commons License.

The Nørreport area is one of the most colorful and culturally vibrant districts of Copenhagen. It is a region that mixes the old and the new. It is a favorite area for local youth and a great place for a walk. Nørreport has many green spaces, art complexes and historic sites to visit. Discover all Nørreport has to offer on this walking tour.

It would be a pity to leave Copenhagen without having explored its specialty shops and bringing home something truly original. We've compiled a list of gifts and souvenirs, which are unique to Copenhagen, that can be bought in shops around the Indre By (inner city).

Slotsholmen, translated as The Castle Islet, is an island in the harbour of Copenhagen. Recognized as the center of the Government of Denmark since the Middle Ages, the island is sometimes referred to as "the Island of Power". Take this tour to explore the Castle Islet with us.

Full of historic attractions and awe-inspiring landmarks, Copenhagen is considered one of the most beautiful cities in Scandinavia. The artistic and creative skills of the Danish people are on display throughout the city. Take this tour to explore the most famous sights in Copenhagen's Indre By (Inner city).