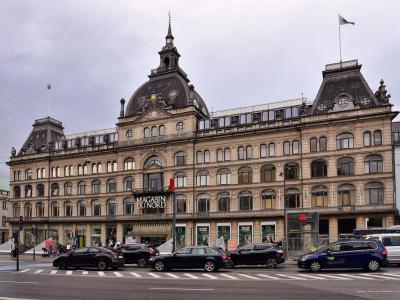 A well-established Danish chain of department stores, Magasin du Nord traces its roots back to 1868 when Theodor Wessel and Emil Vett opened a draper's shop in Aarhus. It was an immediate success and two years later the company opened a shop in Copenhagen in rented rooms of the mondain Hotel du Nord. As the department store came to occupy a large part of the hotel, the company adopted the name after it in 1879. By 1889, Magasin du Nord had taken over the entire hotel and proceeded to demolish it together with a neighbouring structure. Completed in 1894 in a French Renaissance Revival style, the current building became the most beautiful department store of its day – a place where modern man could be awestruck by everything the great wide world had to offer. Inspiration came from all corners of the globe, and the goods from Paris, Berlin and London, as well as Copenhagen's own illustrious fabric and furniture factories.

Magasin du Nord continues to offer great shopping stores and good quality products to this day. Each of the five floors have their men's, women's and children's department while the rest is taken up by kitchen accessories, home decors, computers and gadgets, sports and luggages, etc. On the ground floor most displays feature perfumes, beauty brand products and designer brands bags, and you'll find two spot places of Joe & The Juice. The underground is where you'll find the food market, a selection of great wines, sport magazines, flowers, chocolates and cake-coffee shops.

***HANS CHRISTIAN ANDERSEN'S COPENHAGEN***
Go and have a look at the attic room that 22-year-old Andersen rented from 1827 to 1828 and where he scribbled some of his poems. You gain entrance through the store and it is situated on the third floor, where you will see a picture of the famous former tenant's distinctive face on the wall. Continue down the hallway and through a meeting room until you see the attic room on your right. There are not a lot of bells and whistles inside, but the tiny space surely exudes a certain poignancy. Entrance is free and opening hours are Thu/Fri: 1–5pm; Sat/Sun: 11am–3pm.