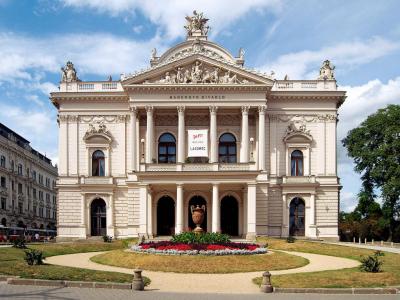 Mahen Theatre (Mahenovo divadlo) is a Czech theatre situated in the city of Brno. The founding stone was laid on July 18, 1881. It was built in a combination of Neo-renaissance, Neo-baroque and Neoclassical architectural styles. Initially, Mahen Theatre was a German opera house, and it was called Deutsches Stadttheater (German City Theatre). In 1918, following World War I, it passed into the hands of the newly founded Czechoslovak state. It was renamed Divadlo na Hradbách (Theatre on the Wall) and the first dramatical advisor became the novelist and playwright Jiří Mahen, after whom the theatre has been named as of 1965. Since 1965, the theatre has served as the home stage of the dramatical ensemble of the National Theatre in Brno. Mahen Theatre, built as German Deutsches Stadttheater in 1882, was one of the first public buildings in the world lit entirely by electric light.
Image by Avfedorenko on Wikimedia under Creative Commons License.
Sight description based on wikipedia