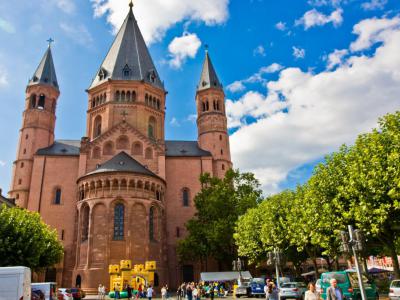 Mainz has been a center of Christianity since 746 when venerated Saint Boniface brought Christianity to the area. Archbishop Willigis ordered a new cathedral and modeled it on Rome's famous St. Peter's. Mainz Cathedral suffered extensive damage from a fire on the day of its inauguration in 1009. It was repaired by 1036.

Mainz Cathedral retains the original Romanesque style, while chapels and other additions have been added over the centuries and reflect each time period's style.

Mainz Cathedral's triple nave Romanesque pillar basilica and the bronze door facing the square are original. The cathedral has several side chapels and is surrounded by other buildings. St. Gotthard's chapel was built in 1137 and features lighter colored stone.

Fire damaged the cathedral seven times over the centuries. The spire was built in 1767 from stone to protect it from future fire damage.

The east chancel is the oldest part of the cathedral, and the walls there are over two meters (six and a half feet) thick. The Romanesque west chancel dates to 1239, and its Gothic belfry was added in the 15th century.

Several kings and queens of Germany were crowned in Mainz Cathedral in the 11th, 12th, and 13th centuries. The Diet of Pentecost was held in the cathedral and is known as one of the most legendary feasts of the Middle Ages.

The Rhine river correction damaged Mainz Cathedral's foundations in the early 1900s. The cathedral was reinforced with concrete and steel. World War II bombs damaged the cathedral, and restoration work continued into the 1970s.

Despite of the damages, there is a good number of art works can be seen inside the cathedral. In the Ketteler chapel, visitors will find an altar to the Virgin Mary. The Ketteler chapel features a statue of the "Serene Lady of Mainz." The wood-carved figures date to 1510.

Today Mainz Cathedral is an iconic symbol of the city.
Image Courtesy of Flickr and LH Wong.