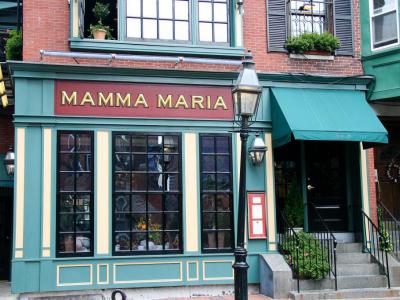 Mamma Maria is a world-class restaurant in North Square, the oldest public square in the United States, home to many pivotal figures in American history. Set in a 19th-century brownstone atop a small hill overlooking the city of Boston, Mamma Maria can virtually transport you to “la Patria” with its Old-World intimacy, attention to detail and a warm welcome much greater than at any other similar place in the neighborhood. If you relish waiters in neckties, white tablecloth ambiance, and the atmosphere of European period setting, this place is for you!

Also distinctive of Mamma Maria is the striking view of downtown Boston – a dramatic contrast between skyline panorama and the twisted streets and cobblestones of North Square – which opens through the wide floor-to-ceiling windows of the five multi-level dining rooms.

Although Mamma Maria is the only Italian restaurant in Boston awarded Four Diamonds by AAA and recommended by The New York Times, it is quite far from claiming to be the best Italian restaurant in the city. Nor is it about creative Italian cooking either. Mamma Maria sticks to the classics and offers seasonally inspired menu with an emphasis on historical and traditionally elegant Tuscan dishes. While the menu changes every night, Mamma Maria is particularly renowned for their Osso Buco (veal) and Rabbit Pappardelle.

The overall combination of North End and the home-style cooking of the rich and meaty recipes that spent decades in the making is what makes this old-school Italian eatery worth coming to. If you’re thinking strategically, eat here before a snowstorm and then you’ll be able to hibernate for a few days!
Image by Tim Sackton on Flickr under Creative Commons License.