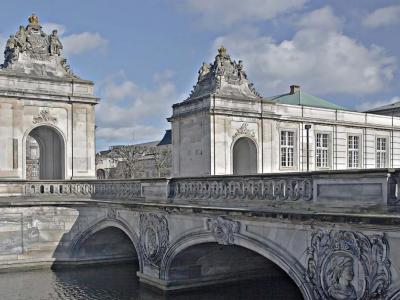 Of the four bridges spanning Frederiksholms Kanal, the most notable is Marble Bridge which provides access to Christiansborg's riding grounds. The old main entrance and one of few surviving features of the first Christiansborg Palace which burned in 1794, this rococo-style bridge was paved with Norwegian marble, hence the name.

The pavilions were every bit as magnificent as the bridge. They were covered with sandstone from Saxony, and sculptor Johan Christof Petzoldt richly decorated the concave roofs with the royal couple's back-to-back monograms and four figures on each roof symbolising the royal couple's positive traits. All works were finished in 1744.

Seen from the shaded banks of the canal, the restored bridge, with its elegant arches, is one of Copenhagen's most attractive sights. For amusement, watch the tourist boats, which barely fit between its pillars, trying to make the corner.
Image by Henrik Jessen on Wikimedia under Creative Commons License.