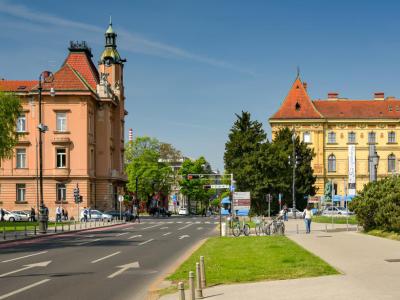 Marshal Tito Square is one of the biggest squares in Zagreb. The square is located in Lower Town, with the Croatian National Theatre building at its centre. It is sometimes billed as the "most beautiful square in Zagreb".

The present-day square was formed in the period between 1856 (when the former hospital was built on its northern side) and 1964 (when the Ferimport building was erected on the western side). However, the majority of buildings overlooking the square were built in the late 19th century in the historicist style of architecture.

Marshal Tito square was the first in line of three squares which form the west wing of the so-called Lenuci's horseshoe a U-shaped belt of squares and parks.

The east wing of the belt is formed by the King Tomislav, Strossmayer and Zrinski squares, and the west wing by the Marulić, Mažuranić and Marshal Tito squares, with the Botanical Garden connecting the two. The square is home to several cultural and educational institutions and several landmark sculptures.
Image Courtesy of Flickr and roksoslav.
Sight description based on Wikipedia.