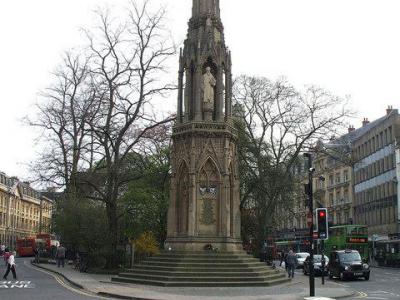 Since the dawn of time, man has committed atrocities in the name of religion. The Martyrs Memorial on the intersection of Beaumont Street, Magdalen Street and St Giles’, is a mute testament to one of those acts.

In 1553, Queen Mary Tudor succeeded her brother Edward VI to the English Crown and restored Roman Catholicism as the main religion. In 1555, she accused The Archbishop of Canterbury, Thomas Cranmer, and two other Anglican Bishops, Nicholas Rigby and Hugh Latimer, of heresy.

It was known that she hated Cranmer, who had dissolved the marriage of her father, Henry VIII, and her mother, Catherine of Aragon, thus making Mary an illegitimate child. The three men were tried and burnt at the stake, Rigby and Latimer in 1555 and Cranmer in 1566.

The Martyrs Memorial is a lovely Victorian Gothic structure that looks very much like a cathedral spire. The three statues of the martyrs were sculpted by Henry Weeks. Sometimes students tell foreign visitors that the memorial is the spire of an underground church and direct them to a flight of steps that lead, in reality, to the public lavatories.

The memorial was designed by Sir George Scott in 1843 and bears a very anti-Catholic inscription. It served as a reminder to the members of the Oxford movement of the very high price the martyrs paid for their religious beliefs.
Image by Kenneth Allen on Wikimedia under Creative Commons License.