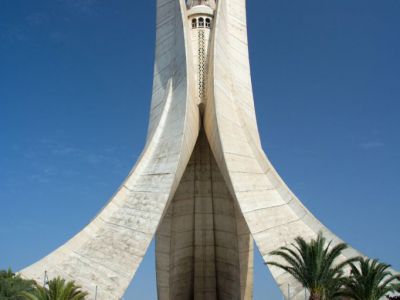 The Martyrs Memorial is an iconic concrete monument commemorating the Algerian war for independence. The monument was opened in 1982 on the 20th anniversary of Algeria's independence. It is fashioned in the shape of three standing palm leaves which shelter the "Eternal Flame" beneath. At the edge of each palm leaf stands a statue of a soldier, each representing a stage of Algeria's struggle. The monument has been erected on the site of an ancient military fort. Consisting of three stylized fins that join mid-height, concrete monument built by the Canadian company Lavalin, based on a model produced in the Beaux-Arts in Algiers under the leadership of Bashir Yelles, it gets to a height of 92 metres. Nine months were necessary to build this architectural work. The monument was inaugurated by the then President Chadli Bendjedid in February 1986.
Image by David Bjorgen on Wikimedia under Creative Commons License.
Sight description based on wikipedia