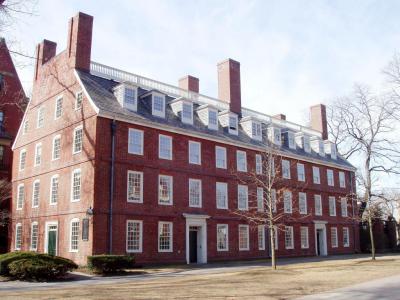 Massachusetts Hall is the oldest surviving building at Harvard University. It was built between 1718 and 1720 as a dormitory when America was still a British colony. It's the second oldest academic building in the United States. Its design is Early Georgian, and its simple red brick walls with white accents exemplify the period.

This dormitory was designed to host 64 students in 32 chambers and 64 small studies. Over 640 American soldiers stayed in the hall during the Siege of Boston from 1775 to 1776.

This dormitory has sheltered many famous and influential Americans. Many founding fathers resided in Massachusetts Hall. John Adams, who would become the second President, resided on the third floor. Founding Fathers John Hancock, Samuel Adams, Elbridge Gerry, and James Otis all slept here while attending classes. These walls have been witness to conversations that planted the seeds of a new nation.

The building currently provides offices for the President, Vice President, Treasurer, and Provost on the first and second floors. The third floor is a freshman dormitory.
Image by Daderot. on Wikimedia under Creative Commons License.