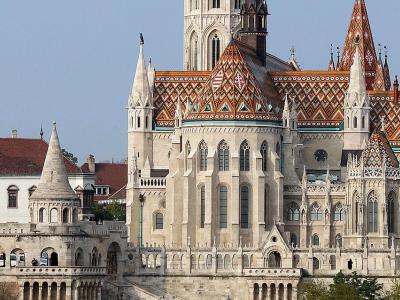 Officially known as the Church of Our Lady, this temple in the Castle District of Budapest is commonly referred to as Matthias Church, after King Matthias who did much to embellish it. A patron of arts and enlightenment, the king is revered primarily for reconstructing the Hungarian state after many years of feudal anarchy.

Historical records suggest that the church was built originally in the 11th century. Initially styled Romanesque, today it features Gothic design adopted in the 14th century. The intricate tile work on the roof makes it easy to spot when visiting the Castle and Fisherman's Bastion.

Considered the 2nd largest church in Buda and 7th largest in Hungary, over the centuries, it has been the site of many royal coronations, state burials and religious ceremonies. During the years of Turkish occupation, the church was converted to a mosque with its original ornate frescoes whitewashed and removed. Upon returning to the Christian service in the 17th century, it had a touch of Baroque style added, to compensate for the damage done by cannon fire during the siege which drove the Turks out.

Today, the church houses the Ecclesiastical Art Museum spanning from the medieval crypt section up to St. Stephen's Chapel, holding a collection of relics, including medieval stone art. Among the displayed artifacts here, both civic and religious, is a replica of the Hungarian Royal Crown. If you're a fan of stained-glass, ancient frescoes and wall decorations, you will find the Matthias Church well worth visiting. Because of the building's great acoustics, it often hosts classical music concerts as well... in case you're interested.

Why You Should Visit:
Breathtaking architectural intricacies in both the outside tiling and the inside design; a great bonus for when you go to see the Castle and Fisherman's Bastion.

Tip:
If you're reasonably fit and have no fear of heights, at a small fee you may get to the observation platform at the top of the church's tower for a bird's eye view of the Hungarian capital. Mind you, though, that the steps are many and are quite steep and not too wide, so you'll have to brace yourself prior to embarking on this daring climb!