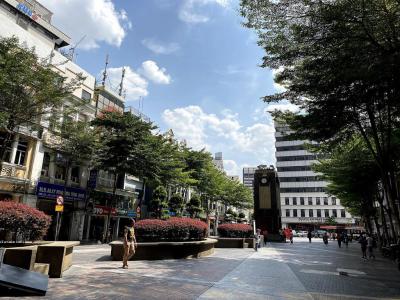 The Medan Pasar is the old market square in the center of Kuala Lumpur. The square is near a number of landmarks, shops and eateries that are within easy walking distance of one another.

Medan Pasar holds the origins to the city. Tin was discovered at the confluence of the Klang and Gombak rivers. Ships, unable to tread further, offloaded their goods on the river banks. Yap Ah Loy, the founding father of Kuala Lumpur, owned the land by the river and established the markets. His home was known as Medan Pasar, which means "market square" in Malay.

Tourists will see buildings that date to the late 19th century when Yap Ah Loy developed a brick refractory and had this brick used on the building facades. The architecture of the buildings around Medan Pasar a combination of Utilitarian, Neo-classical and Art Deco.

One of the most famous landmarks in Medan Pasar is the Clock Tower, which was erected in 1937 in honor of the coronation of King George VI.
Image Courtesy of Wikimedia and Brownc.