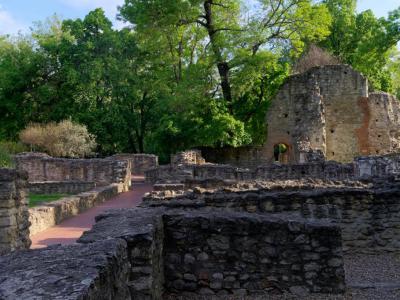 Margaret Island – known as the Isle of Rabbits, or Hares Island during the Middle Ages – has been the home of many religious orders throughout history. Popular with photographers, the 13th-century Dominican nunnery here, built to honor Virgin Mary, is perhaps one of the most classic examples of Medieval monastic complexes. The nunnery and order proper were very wealthy and powerful, with many miracles supposedly performed by Margit (or Margaret), daughter of King Béla IV, and the convent quickly became the place to be for aristocracy.

The king also founded a friary (one of the two remaining in Budapest) and monastery nearby. The façade and sidewall of an old Gothic church still remain standing – though, sadly, much of the stone was lost in 1796, during the Turkish Occupation, in order to build the palatine's villa. In slightly better shape, the small chapel from the Premonstratensian monastery dates back to 1225 and was reconstructed by Karoly Lux after an excavation of the area.

Margaret Island has been described as a "strange alchemy of geography and history", and this impressive set of ruins certainly adds to its mystical aura.
Image Courtesy of Wikimedia and Jakub Hałun.