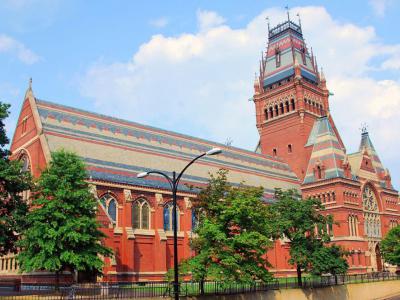 Completed in 1878, Memorial Hall is one of the older buildings on campus. Memorial Hall was funded by alumni who wanted a memorial on campus to honor Harvard men who fought and died for the Union during the Civil War. The building was designed by alumni William Robert Ware and Henry Van Brunt.

The building has a High Victorian Gothic design. The tower reaches 195 feet, making this an imposing and distinctive structure. The building has three portions: Annenberg Hall (originally known as Alumni Hall), Memorial Transept, and Sanders Theatre.

Annenberg Hall is a large open space that has mostly served as a dining hall. It is lined with pictures and sculptures of distinguished alumni and serves as a space of inspiration for students.

The Memorial Transept is the heart of the building. It has a marble floor and a towering 60-foot high gothic vault. It features black walnut paneling and stenciled walls, and large stained glass windows adorn the space above each exterior door. There are 28 white tablets engraved with the names of alumni who died fighting for the Union during the Civil War.

Sander's Theatre was modeled on Christopher Wren's Sheldonian Theatre. This part of Memorial Hall was completed in 1875. It has a seating capacity of 1,000 people and has been praised for its acoustics. It hosts lectures, classes, concerts, and ceremonies. Martin Luther King Jr., Winston Churchill, and Theodore Roosevelt have spoken in this theatre.
Image by chensiyuan on Wikimedia under Creative Commons License.