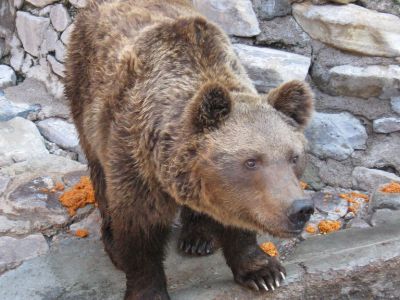 The Mendoza Zoological Park is the only zoo in Mendoza Province. It covers 48 hectares (120 acres) and has about 1,100 animals. The zoo was established in 1903 by the landscape architect Carlos Thays, who was also commissioned to design the Parque General San Martin. Construction works began the following year, during the government of Emilio Civit. Initially the zoo was located at the current school-home “Eva Peron”. There Carlos Thays constructed a building that would be used as a cage for lions. Ponds and roads were also built later.

The first animals arrived on May 18, 1903 donated by the city of Buenos Aires. The group included a zebu, 6 dogs, 6 guinea pigs and rabbits. New animals (also donated by the city of Buenos Aires) came in 1905 while construction work continued. This time, joined a lion, a bear, two monkeys, two parrots and a blue jay. In 1939 was taken the decision to relocate the zoo. The zoo was placed on the northeast slope of Cerro de la Gloria. Taking inspiration from various zoos around the world, the architect designed semi open enclosures that simulate natural habitats and provide enough space for animals, without bars or cages, just with different levels and building stone walls of the curvature of the hill. The zoo was officially reopened in 1941, covering 40 hectares (99 acres) and including 6.5 kilometres (4.0 mi) of paths and roads.
Image by flekoso on Flickr under Creative Commons License.
Sight description based on wikipedia