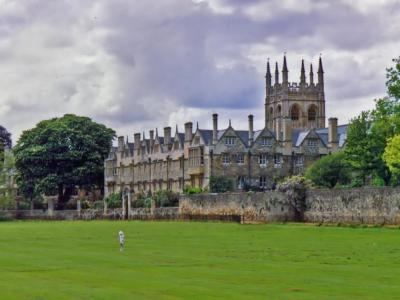 Merton College was founded in 1264 by Walter de Merton, Lord Chancellor to King Henry III and later to King Edward I.

Following the dissolution of monasteries in 1548, the college bought Saint Alban Hall from the Littlemore Convent, although it remained a separate institution until 1881.

During the English Civil War, the college was used as Royalist headquarters with much of Charles I’s court lodging here. Foreign guests were also lodged, including Queen Henrietta Maria of France. She stayed in a room above the arch between the Fellows and the Front Quads, in what is now called the Queen’s Room.

The college continued to buy up other properties on Merton Street, as and when possible. It acquired the former Parish Church of St John and three adjoining houses that now form the north range of the Front Quad.

Merton College once owned all the land from where Christ Church now stands on the south-east part of the city to the land to the east of the college, which is now a garden. Corpus Christi stands on the land at the west end, which they lease from Merton.

Merton's notable alumni and academics of past and present include four Nobel laureates and writer J. R. R. Tolkien who was Merton Professor of English Language and Literature from 1945 to 1959. Merton is one of the wealthiest colleges in Oxford and has a strong reputation for academic success, having regularly ranked first in the Norrington Table in recent years.
Image by Phillip Capper on Flickr under Creative Commons License.
Sight description based on wikipedia