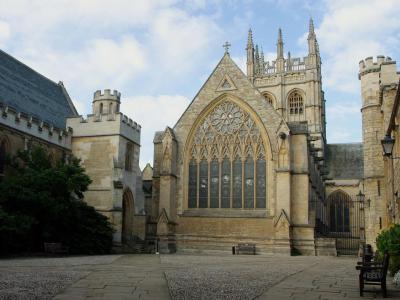 Of all the college chapels in Oxford University, Merton College Chapel is the largest and is one of the best examples of Early English Period architecture.

The first chapel built for the college in 1266, it wasn’t very sound and, by 1288, through bad upkeep, had almost fallen into ruin. The new church was started in 1290, with the Choir and the huge East Window finished in 1294.

Its Quire Walls have seven pairs of stained-glass windows, 12 of which, including the Annunciation Scene and heraldic glass in the East Window, were created in 1296. The other two windows date back to the 15th century; all of them survived the Reformation.

The Crossing and the South Transept were completed in the 14th century; the North Transept and the Great Tower were built in 1450. The Gothic roodscreen and the lectern, which was donated by John Martlock in 1504, were left untouched by King Henry VIII’s Suppression Acts.

In 1655, the roof of the South Transept collapsed and was rebuilt by Sir Christopher Wren in 1671; the medieval bells were recast at the same time. In 1802, the College Brewery was installed in the Sacristy, but was removed in 1886 when the chapel was restored, and the monuments in the Sanctuary were moved to the Ante Chapel. The beautiful chamber organ, built by Thomas Parker in 1762, was left in place and underwent restoration in 1999.

The chapel served for many years as the parish church of St John, as well as the college chapel, which explains its size. There is a door leading onto North Street, through which the parishioners entered, and two doors opening onto Merton College.
Image by Tom Murphy VII on Wikimedia under Creative Commons License.