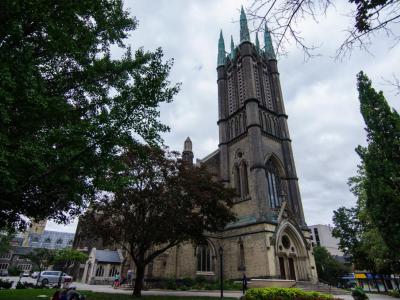 On your architectural tour of Toronto, the Church that will definitely make the A list is the Metropolitan United Church. With an overpowering appeal and majestic dignity, the Metropolitan United Church stands at the junction where Queen Street meets Church Street. Designed by Toronto’s revival godfather- Henry Langley, the Church took form in 1872.

Built with the capacity to seat more than 1900 people, the church was very often referred to as Cathedral of Methodism. So elaborate and rich is the architecture of the church that on several occasions the structure was referred to as the most handsome building in the city.

The chief architect of the Metropolitan Church was Henry Langley. Known for his conservative architectural ideas and designs, his style is reflected in this brilliant structure. Having a typical orientation towards Gothic architecture as displayed in most of his designs, the Metropolitan United is no exception. As brilliant as his other designs, this structure too stands as an example of how each of his work supersedes the previous one. With shades of grey and undertone of brick, the exterior of the church comes across as quite stern yet elegant. Equally stunning is the interior of the church where the sheer grandeur and opulence of the architecture can be appreciated.
Image by Jeff Hitchcock on Flickr under Creative Commons License.