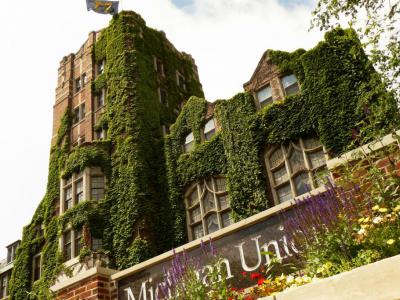 The Michigan Union at the University of Michigan was completed in 1919. It was originally built to house an all-male student group of roughly 1,100 members. The first Michigan Union was in the former Thomas Cooley house. However, the growing population necessitated the home to be demolished so that the current building could be constructed. It was designed by architects Irving Kane Pond and Allen Bartlit Pond.

The continuous growth of the University of Michigan led to numerous renovations and additions over the years. The building was first expanded in 1936. Further expansions and renovations took place in 1938, 1955, 1994 and 2018. By 1968, all areas of the Michigan Union were considered co-ed.

The Michigan Union now offers a wide variety of services to students at the university. Along with meeting spaces, the union offers restaurants, shopping and student support services. There are also a number of administrative offices in the Michigan Union.

Those wishing to visit the University of Michigan campus will find some points of interest on the front steps of the building. President John F. Kennedy, then a candidate, spoke of his proposal for the Peace Corps on these steps, which is marked with a plaque. There are also two statues that represent the athlete and the scholar.
Image Courtesy of Wikimedia and Vincent Arel.