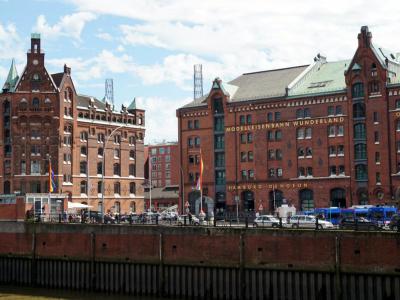 Miniature Wonderland claims to be the world’s largest model railway attraction. It is housed in an otherwise unassuming brick warehouse building on Am Sandtorkai, close to the Dockland Museum. The vital statistics of this project, the work of local twins Frederik and Gerrit Braun, are staggering. The model covers over 12,000 square feet of floor space. The railway lines themselves comprise 12,000 metres of track, carrying 890 trains with over 11,000 carriages. The model landscape is dotted with 300,000 lights, 215,000 trees and 200,000 miniature residents – and it is still growing.

First opened in 2000 by the Braun twins, the model railway is expected to be completed in 2020. By that time, it will cover double the area that it does now. The current exhibition is divided into seven sections – Harz, Knuffingen (a fictitious city), the Alps, Hamburg, America, Scandinavia and Switzerland. The latest addition is Knuffingen Airport, which sees model planes arriving and departing regularly. The creators have already begun work on scale models of France and Italy.

The Minature Wonderland is open from 9.30am to 6pm on Mondays, Wednesdays and Thursdays. It opens later on Tuesdays and Fridays. On Saturdays, the attraction opens at 8.30am and closes at 9.00pm, whilst on Sundays, it opens half an hour later, and closes at 8pm. Entry is 12 Euros, with half price admission for under 16s.
Image by Gulp on Wikimedia under Creative Commons License.