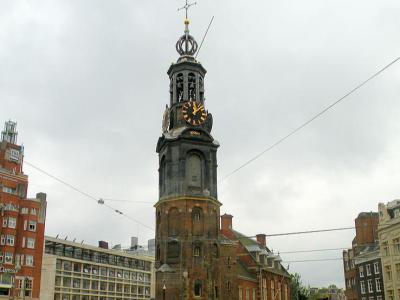 The Mint Tower is one of the structures in the city which has a rich past. A part of the wall that guarded the city of Amsterdam, the Tower was one of the main gates of the Regulierspoort.

Built in the latter half of the 15th century, the Tower underwent tremendous renovation over the centuries. From the fire of 1618, which engulfed and destroyed most of the city’s walls, the Mint Tower emerged almost untouched, only to be reconstructed in the Renaissance style a year later.

Hendrick de Keyser, a renowned Dutch architect and sculptor, oversaw the building’s reconstruction and also attributed to the stylish eight sided top half of the Tower. Elegant additions of 4 clock faces and a carillon of bells were also made. Today the original bells are on display in the Amsterdam Historical Museum and replaced by newer ones. The Tower chimes ever quarter of an hour and on Saturdays between 2 and 3 pm one can hear a live concerto of the bells.

The Tower earned its peculiar name in the 17th century, when the Dutch were at war with England and France. With most of the Dutch territory occupied, the risk of losing valuable resources was high. A tower was used as a make shift center to mint money which is now known as the Mint Tower.
Image Courtesy of Wikimedia and Weefemwe.