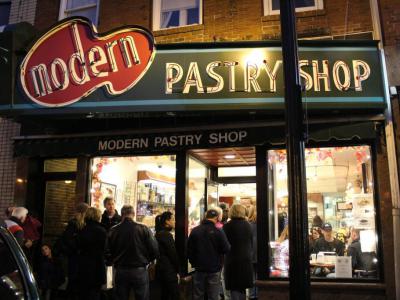 Modern Pastry is an iconic North End pastry emporium with a loyal following. Yet this family-owned bakery has been in business for decades, it has a rather modern vibe – hence the name. The place is known for its wide selection of delicious pastry: old-world cakes, eye-catching cupcakes, cookies, pizelles, and chocolates, but above all – for their main specialty that makes it worth queuing here for – cannoli.

In terms of cannoli, Modern Pastry famously rivals another landmark bakery, Mike’s Pastry. In fact, the whole city of Boston is split between Mike’s and Modern on the cannoli front, in which the tourists seem to favor Mike’s, whereas locals prefer Modern. You'll have to see for yourself where you stand on this one. While at it, make sure to also check out Modern Underground for a decent cocktail to go with your dessert.

Modern's indoor seating area is much like a social club where the owners pride themselves on their ability to recognize customers. Whereas cookies are their main highlight — sold by the bulk for as little as $5 per bagload (bargain!), they also have a breakfast and brunch menus served before noon. So if you're in the vicinity struck with veracious appetite, be sure to pop in and, after finishing your meal, treat yourself to, say, some delightfully flaky sfogliatella (lobster tail pastry) and a coffee.

The family of chefs behind this bakery have honed their pastry craft for over 150 years, across continents, so they know what they're doing.

Tip: when the lines are long, they open up a smaller store next door that sells exactly what they have in the larger bakery. Only the locals know to go there.
Image by Shinya Suzuki on Flickr under Creative Commons License.